Skip to content
26th October 2014
Today i finally did it!! Something that ive veen wanting to do for a really long time. I understand it may not seem like a big deal to many people. But to me. It is.

I know many people would say “if u wanna do it. Just do it.”

“Hes not a controlling guy. I just dont like uncomfortable situations ”
Many people would say, “if u wanna do it then just do it la. Its ur life ur decision. Why bother what others say?”

It does to me. As its something on my face, and i dont want my bf to hate it or be uncomfortable with it and force to look at me everyday with it.

Then everytime he see me hed be unhappy!! Who wants that??

So after a year, with many help of friends and many months of pointing out girls eyebrows and telling him

1. Its not a tattoo
2. It doesnt turn purple
3. Its no longer the old technology used by those aunties

You wouldnt believe how happy i was the day he said
“Ahya.go do eyebrows only la! The one at ipoh same as weiwei.”

“That was when i made an appointment to do it. So exciteds!!!! (Theres an s cause so many excitements!!!) ”
Was suppose to do it ytd. But then was late so had to do it today. Weeeee.

Reached the place at 12.50 and the lady removed my eyebrows makeup.

Here is a picture of me with my eyebrows makeup

So this is how i usually draw my eyebrows which takes 15 mins everyday.
This is how my original eyebrows look like.
Barely anything there. LOL.
After they removed the makeup, they applied numbing cream and sticked the clear foil over my brows.

I was sensitive to the numbing cream so wherever it was applied it became red. But then it was still okay.

Numbing cream was applied for 20 minutes. After that it was time to draw my brows. Took the lady 20 minutes to draw them till satisfaction because i totally had no shape or nothing else.

I know it looks abit off but its just a rough outline and shape. I didnt wanna go the typical arch. And i was very fussy also. Hahahaa.

Then it all started. I was panicking abit cause i didnt know how painful it was and would i be startled and jump? What if i jump and it poke my eye or something? Lol.
Definately felt it. Some areas were abit painful, but she dripped this serum oil that eased abit.

She did the right eye first. Then moved to the left eye. But by then, the numbing cream effect wasnt so effective. So i started feeling the pain.

I couldnt close my eyes and sleep. Because i could feel the pain more. So i was surfing facebook and taking videos. LOL
Had to trim the video to 15 seconds.

I know it looks exactly like a tattoo. I dont know if it feels like it cause ive never done a tattoo before. But i guess should be somehow similar.

And yes i took selfies and camwhored during the procedure. LOL.
“In the end….. ”
Dont mess with me yo!!!
This doesnt last forever.

Badly taken care will be 1 year. Taken care with great love up to 5 years. 😀

AND!!! i dont look like this for the next five years!! Its just for four days until it peels and come off.

Stay tune for my updates. 🙂

Do i look fierce?? Hahaha. For once my brows look thicker than fattys.

Does it hurt?
The procedure was still bearable but an hour after the procedure. OMG. That numbing cream wore off and the pain came. LOL.

Even with the numbing cream i felt a slight pinch pain. I cannot imagine without it.

After that went out yum cha somemore.

And i resulted in cutting my bangs back because those sin chan brows were too much to take. Everyone was staring and everyone was looking. ANDDD everyone was asking. Fatty was like “NO!!!!! Leave your bangs!!” 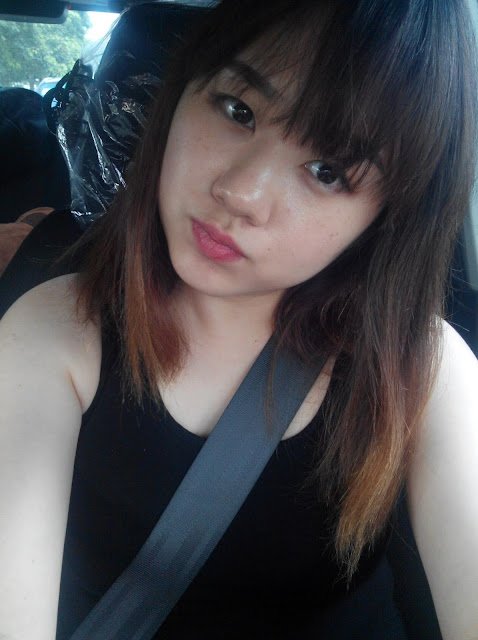 i’m like “my bangs will grow..”
31st October 2014
It has finally peeled all. Not sure if it will peel a second layer or what. But i not longer have sin chan brows. 😀 I now have pretty brows. BUAHAHAHHAHAA